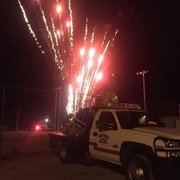 Here are just a few shots of the fire department in action.

Click on the picture and scroll to see them all.