Tonight
A 20 percent chance of snow. Mostly cloudy, with a low around 23. Windy, with a northwest wind 20 to 25 mph increasing to 25 to 30 mph after midnight. Winds could gust as high as 40 mph.
Thursday
Partly sunny, with a high near 31. Windy, with a north northwest wind 30 to 35 mph decreasing to 20 to 25 mph in the afternoon. Winds could gust as high as 50 mph.
Thursday Night
Mostly clear, with a low around 11. Northwest wind 5 to 15 mph becoming west southwest after midnight.
Weather forecast provided by weather.gov.
Sign In LinkSearch

Chimney Rock National Historic Site is one of the most recognizable features of the Western Nebraska landscape and the west. Being the fourth most visited attraction in Nebraska, Bayard felt that every opportunity should be taken to showcase this natural feature.

In late 2016, the city pursued funding to improve the lighting. Outdated lighting partially lit the monument at night and did not produce the desired effect that had been first envisioned. The city looked at replacing the old lighting system to LED fixtures. Upon the installation in May of 2017, the visibility has improved dramatically.

Having the opportunity to experience the uniqueness of this feature at night adds to the western Nebraska experience and emboldened the community pride that Bayard has taken over the years of claiming Chimney Rock their own.

In addition to installing new lighting, colored lenses were purchased to light the monument in different colors for specialized events and holidays (Red, Blue and Green).

Bayard could not make this project possible without the great partners in the Panhandle region. In all, $12,186.34 was raised for the project. The following organizations and individuals on this page donated to the Chimney Rock Lighting Project. 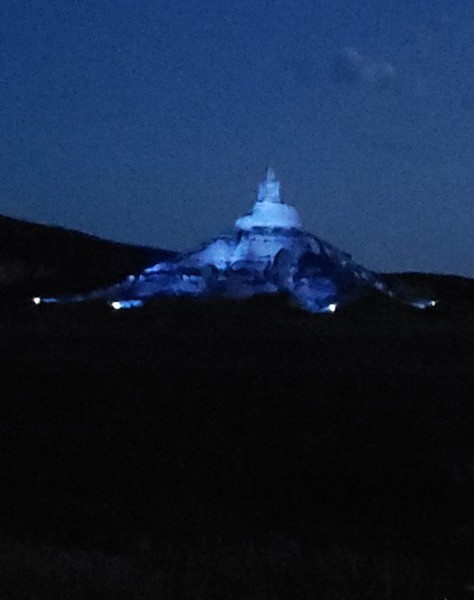